Charging LFP (LiFePO4) batteries to 90% SOC, or not

karrak Solar Expert Posts: 326 ✭✭✭✭
May 2017 in Off Grid Solar & Battery Systems #1
Before I installed an LFP battery in my off grid power system in 2013 I researched the best charge parameters for safety and most cost effective utilisation of the battery. I came to the conclusion that charging to only 90%SOC was a good idea. After four years of use, more research and some experimentation I no longer think this is the case both from a practical point of view and with regards to battery utilisation.

Charging to 90% if you have a power supply that has a fixed current output is reasonably easy to do. With reference to the graph below for Winston cells all one has to do is charge at a fixed rate of 0.25C and terminate the charge when the voltage reaches 3.45V/cell (13.8V for a twelve volt battery). 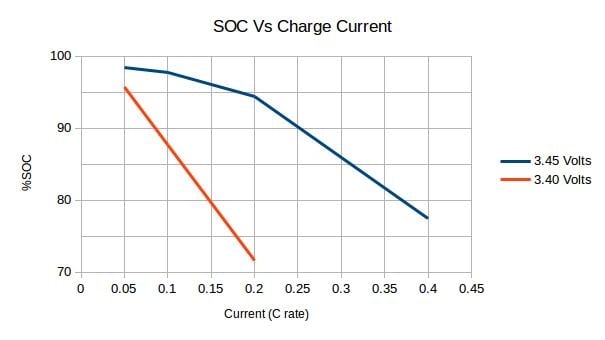