softdown Solar Expert Posts: 2,914 ✭✭✭✭
December 2019 in In the Weeds--Member's Choice #1
So I bought a 240,000 mile 2012 Prius  for $2500 knowing the EV battery is about gone and there is a "noise in the ABS system" though the brakes are currently working very well. Well - I enjoy the challenge of breathing new life into bargain vehicles it seems. A more "solid" and lower mileage 2012 Prius runs closer to $9,000 plus or minus a few thousand of course. He drives me around for an ~hour while I get used to what looks like a spaceship to these old eyes. Then I drive if for an ~hour, all feels very good. Long drives? Turns out we kind of hit it off.

Shops charge well over $2200 to replace the ~80 lb. NiMH high voltage EV battery with 28 modules.  There are multiple youtube videos on doing the job yourself. There are a lot of details and bolts and materials - decent do it yourselfers can normally look forward to spending an afternoon doing it themselves.

Found a craigslist ad offering a "good" Prius EV battery from a 2014 for $650. 2014 is "compatible" with 2012. The seller is parting out a dented up 2014 with "130,000" miles. Looks interesting - the battery is only 5-6 years old and I can verify the odometer reading. Right? Wrong - the car was emptied of valuable parts and crushed two months ago - the craigslist ad is two months old. I decide to meet anyway - why not?

Turns out the battery has no manufacturing date but the seller seems honest enough and certainly knows EV car batteries due to his "owning a transportation company" that uses hybrid EV vehicles. Questioning reveals he has had the battery sitting for four months and it sat for another two months before he purchased it at a car auction. At least six months of sitting. I say that it might be a brick and the price would have to be really low to take a chance on it. There is no way to test the modules without removing well over 60 small bolts and it is late.

He says that he has turned down offers of $400 and won't sell it "real low". I say that I can't pay good money for an almost complete unknown that may be a brick. After all, I can buy tested modules for about $30 each. The Prius has 28 such modules. This deal is now off.

Then he makes an irresistible offer: Take the battery home and try it out for a couple weeks. Pay if I decide to keep it. He says he trusts me and declines on even taking a picture of my drivers license. I take the offer saying that I will measure each of the 28 modules. That will mean removing the plastic tamper proof seal which likely lowers the value of a 2014 Prius EV battery. But how can he expect to get good money with no proof whatsoever of a good EV battery? He realizes this is true of course. If a lab tested it and certified its health, the value would go up exponentially.

This "deal" is weird. But how can I miss  if I can test the battery for a couple weeks at no charge?

What will he likely say if I come back and say his battery is worth "$500" to me, that figure could be higher or lower of course.

Having another complete EV battery is a nice luxury. That allows one to optimize a battery before replacing it. Sort of like having a spare engine when doing an engine overhaul. The spare battery is likely worth at least $150 to me. I anticipate finding mostly good modules, maybe ~3-4 questionable on a 2014 Prius NiMH EV battery with 28 modules. But used batteries always surprise - one way or another.

Here is the Prius EV battery - there are a LOT of parts. After removing 48 small bottom bolts, one can start to get at 28 modules. You can see the orange tamper proof seal on the lower right. 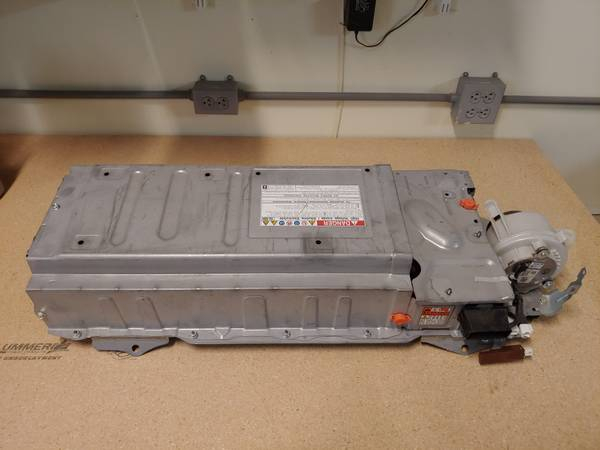