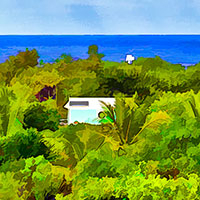 
Greetings from The Bahamas!

I moved to a very small, off-grid cottage on a Bahamas out island a little over a year ago. Recently I have been unable to run the 4 cu. ft. fridge (Avanti, Amps: 15, Voltage: 115 Volts) through the night. There are 2, 250 watt solar panels mounted on the roof, receiving full sun when the sun is shining. There are 2, PVX-1040T Sun Xtender batteries hooked to a 24volt MicroSolar 1000/2000 (surge) Pure Sine Wave Inverter. The fridge is plugged directly into the inverter. I have an additional load comprising a small laptop and a smartphone used to provide hot spot for internet connectivity. These are plugged in (charging, more or less) much of the day and into the night (for research).

The cottage was not used for year-round living by the previous owner, and I expected that I would need to upgrade the solar system. However, since I will be building on an addition to the cottage and will have some greater power needs at that time, I am concerned to do a minimal fix/upgrade at present, with a view toward a more robust upgrade in the future.

Since I am thinking I need batteries, I have looked at a few: Sun Xtender  PVX-1290T and the Renogy AGM 200ah.  I am unsure whether these will work? I am also considering doubling the solar array to 1000 watts, if that will help.

I am uncertain, but I think my problems with power shortage began or were greatly exacerbated by the week long spell of cloudy weather associated with Hurricane Dorian earlier this year.

Many thanks for help and suggestions!