JBish130 Registered Users Posts: 8 ✭✭
October 2016 edited October 2016 in Solar Beginners Corner #1
Hi, I have a small hybrid solar power system up here in Maine, we are entirely off grid as the power company doesn't have service along our section of the road. We use a Xantrex 6048 inverter, 4 Trojan AGM 8D batteries, a Xantrex Solar Charge Controller, and 4 315w Solar World panels and 7000-7500w generators.

Since our system is currently as small as it is, we always bump up the batteries with the generator at night before we go to bed. This assures us that we won't wake up to the beeping warning us to low battery power first thing in the morning. My current goal is to install an automatic generator start/stop control for our system so that I don't have to walk out and physically start the generator. While this isn't a problem (either generator is electric start), driving rain or blizzard conditions makes it less than the perfect situation.

For us, the problem of making our generators automatic start is the lack of an automatic choke. Many have arrived at this exact same situation, you want to make the system automatic but lack the proper generator to do so. We are currently using a Generac 7,500w unit, and an identical (except for paint and brand) Predator 7,000w unit from Harbor Freight. Except for slight cosmetic differences, these are the exact same units.

Yesterday I accomplished the homemade automatic choke for our generators and it cost next to nothing. I thought others might be interested in how I did this. I decided to use air pressure from the blower to operate the automatic choke. There is a rubber plug on the front of the cowling that gives access to the blower. I fit a 1/2" brass angle into that opening and secured it into place. From there, I ran a plastic 1/2" pipe down under the engine to the rear of the unit where I used a couple of 45º angles and a little more pipe to direct that air towards the choke lever. I had to modify the choke to remove the "locks" that hold the coke in the open and closed positions. For this, I removed the carburetor and smoothed down the plastic part that mounts on top of the choke shaft. This allows the choke to flop around open and closed with no restriction. I removed the choke lever and added a wire attached to a small lightweight spring to gently pull the choke into the closed position. Then I cut out a piece of plastic which I used plastic wire-ties and Gorilla Glue to attach to that lever as a wind vane. As soon as the engine starts, the air blowing from the pipe aimed at the choke lever blows and holds the choke open, which allows the unit to run. This is a very simple, easy to understand passive type of system that is working perfectly for us.

I happened to have the brass fitting (which would have cost about $3.00) and scraps of the black plastic pipe. The total cost amounts to that brass fitting, two plastic elbows (60¢ each) and the spring (40¢). Had I bought everything for this modification, it would have cost me well under $10. This allows us to utilize the automatic generator start/stop module, making our generators fully automatic. While I don't have that part tied in yet, the automatic choke for these generators that I have built is a great success. It works perfectly. I made a video of the first automatic choke, and while I had to pull the rope (this generator hasn't been in service since last January and I had the battery on another generator), you can see it working.

This method is a lot easier and cheaper to manage than solenoids and all that. It works pretty much exactly the same as the automatic choke on lawnmowers and pressure washers. I hope this video helps others who might be dealing with this exact same situation. I can tell you, I truly believe that "Simple is Beautiful" and that this automatic choke works very well. I will be adapting the other generator in the exact same way.

Here is a link to the video on YouTube: 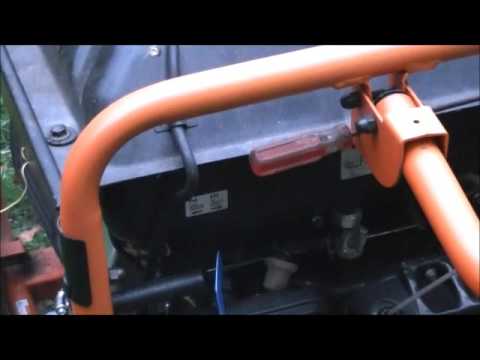