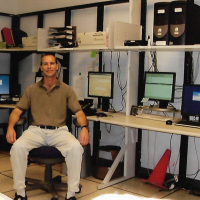 blueskies Registered Users Posts: 32 ✭✭
July 2019 in Off Grid Solar & Battery Systems #1
Hello friends,
I have an inverter question.  I got a Samlex 3000 watt/24 volt inverter.  I trust this is an efficient brand of inverters based on research and recommendations.  It will be ideal for running high watt loads for about 30 minutes around noon - such as my Haier washer (tiny and efficient, holds about a milkcrate of clothes).  The manual states the inverter uses about 1 amp when no load is connected.  However, When I plugged a led bulb into it, I noticed the battery levels go down faster than expected.  So when the unit is in operation, even with a small load it draws a good deal and I should probably have a separate inverter for small loads.  Am I on target or way off in this deduction?
As a side note - I have a midnite kid and plan to use that for an independent 12 volt system in a separate room.  I like this because it seems much easier and more economical for setting up a diversion 5 gallon water heater when the batteries are charged and not being drained by tv/computer.  What do you think?
Thanks in advance and also for all your insight in the past.
0 · Share on Twitter