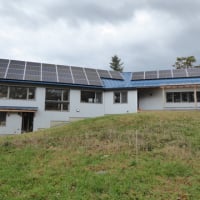 ewb Registered Users Posts: 17 ✭✭
February 2019 in Advanced Solar Electric Technical Forum #1
In the XW+, the Grid Support and Grid Support Voltage (GSV) settings seem to serve several purposes. One of those is to enable the use of excess power from an external DC charger to help power locally connected loads on ACout or even to sell back to the grid (if enabled).
I am mostly interested in the situation where the charger is a Conext MPPT-80-600 or 60-150 and Enhanced Grid Support is enabled by setting GSV to a high value above the charge controllers equalization voltage (eg: 64 volts), and grid selling is disabled.
Question 1: Does this function work if the grid is down (eg: AC1 is not qualified)?
Question 2:  If so, does it also work if a generator is running and qualified on AC2 (possibly with generator support enabled)?
Question 3: In these cases does a charge controller (eg: MPPT-80-600) modulate the PV power to match demand changes on ACout since it cannot sell excess power? Is that mediated by the DC bus voltage or by Xanbus commands?
Question 4: If Grid support is not enabled, would an MPPT-80-600 likewise modulate the DC power to maintain the absorption voltage or the float voltage (eliminating excess power)?
I have not been able to find answers to these questions in the manuals or online.  My apologies if this has been addressed before. I do not own any Schneider equipment, but am considering installing an XW+ and an MPPT 80-600 and just want to understand how they work.
42 300W Solarworld. SB6.0, SB3.8, SB3.0 Owner installed. Mitsu. Hyperheat, State HPX-80. All electric, net+, climate zone 6.