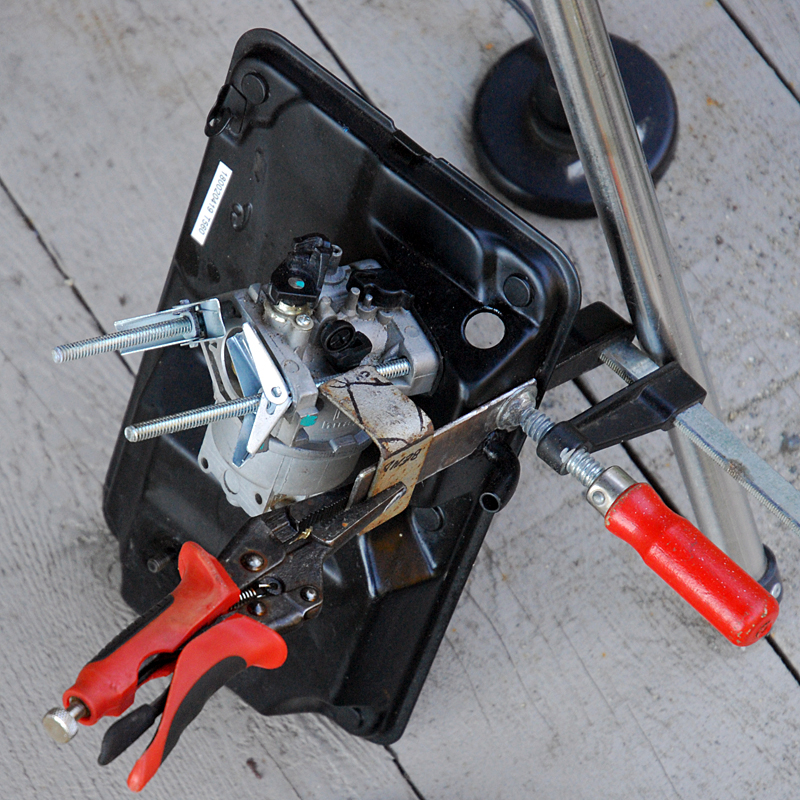 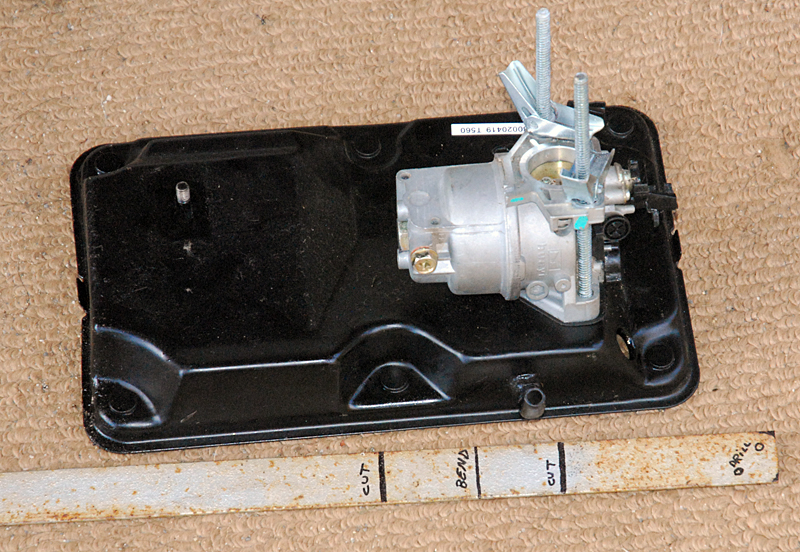 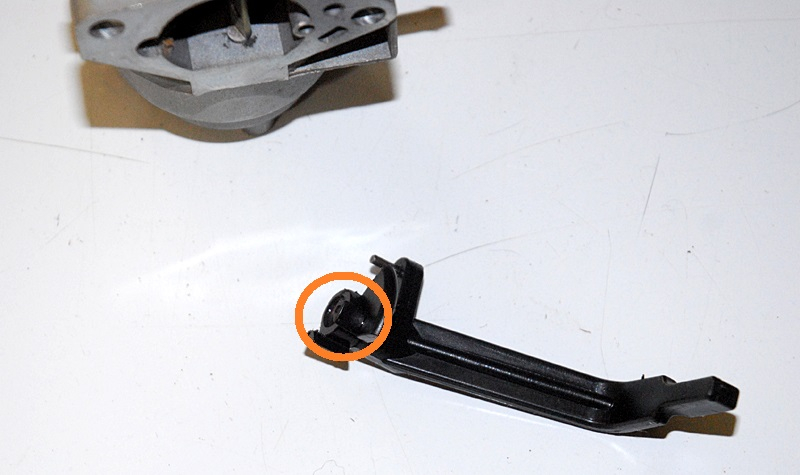 I've been working at this off and on for about a year, but finally hit success.  The goal was to install an automatic choke on my 7.5Kw generator from Harbor Freight.  (This is basically a clone of the 7.5Kw Generac I have.)  If I could get the automatic choke to work, then I could wire the switch to the AGS panel for my Xantrex 6048 off grid system.

I tried using air pressure from the blower shroud to open the choke (which almost worked), but ended up using a $3.50 solenoid from China and a little scrap metal.

When I first put this together, I wired it to switches inside our cabin.  I wanted to be able to test it and have it prove itself before I ordered the Auto Gen Start controller.  It worked good, we would push a button to start the generator and flip a switch to shut it off.

With the Auto Gen Start right now, my generator starts up automatically as needed based on the charge of the batteries.  I don't use the "quiet time" feature and don't mind hearing the generator start up.  Instead I take deep satisfaction of how well this system is working for me.

There are a number of steps that I took to do this, nothing too complex.  The nice thing I did take into consideration, because I have two different yet essentially the exact same versions of these generators mentioned above, I made it so that it could easily be switched from one generator to another in the future as I replace worn out generators.  I use the Harbor Freight generator as my primary generator, it has about 2,000 hours on it.  My secondary generator is the Generac, which has about 3,000 hours on it.  I will outfit both of these with the automatic choke, so in case the primary generator fails for whatever reason, I can switch a plug from one generator to the next and put that one into immediate service.  That's my plan B.

The first step was to modify the plastic choke lever itself.  It has a "locking" feature where it "snap" into either full choke or wide open.  Close inspection, though it's really hard to see, shows that the bottom of the plastic lever is formed in a way as to "bind" in those extreme positions.  I heated the flat of a screwdriver and slowly reduced the shape of the choke lever until it would move freely from full choke to wide open with no restriction or binding.

Once I had the air cleaner off of my generator, which I had to do just to get a good view of the carburetor, it occurred to me that I happened to have an extra carburetor for these generators around.  Anyone else could use their existing carburetor, but would have to remove it from the generator.  I took a couple of long toggle bolts and bolted the air cleaner to the carburetor so that I could have them together as they would be on the machine while holding the assembly in my hands to get a good look at it.  The course of action was quickly obvious to me while seeing the carburetor in this manner.  I would cut a piece of flat stock that would rivet onto the air cleaner and extend level most of the length of the carburetor.  From there I would take a shorter piece of that same flat stock, and put a 90º bend in it.  Once the first piece was attached to the air cleaner, I lined up the angle piece and clamped it into position for drilling and rivets.

I had made a stencil from the bottom of my solenoid and punched through the centers for two mounting screws.  I placed that upside down on the angled metal and aimed it at the metal pin extending from the choke lever that moves the butterfly for the choke.  Once drilled and mounted, I placed the choke in the full open position and measured from the pin to where the pin goes on the solenoid.  This measurement will depend on how you position the metal supports.  I marked and drilled two holes in a piece of scrap tin the distance needed for those two pins, and snipped out the tin.  This will act as the pull rod for the choke.

The electrical connections for this solenoid are 12v.  I wanted the choke to be pulled on full when the engine is cranking, so I connected one lead to the starter wire at the starter solenoid and the other wire to ground.  I activated the solenoid and found that it closed the choke completely.  I was concerned about this because the solenoid I used only had a 5/16" total range for working the choke.

The electrical connections to the switch were simple enough.  The switch is the "rocker type" with an OFF, RUN, and START position where the START position is spring loaded.  I leave the generator in the "RUN" position at its switch for remote operation.  There is a reason for this.  If you were to check the back of the switch, which requires opening the panel for access, you would find that the switch as six connections on the back side.  Two sets of three contacts.  If you were to check them for continuity, you would find that the "Power In" contacts on the switch are the two center contacts.  When you push the switch to the bottom position (OFF) those center contacts will connect to the top contacts (it's counter-intuitive unless you think about it).  When the switch is pushed and held in the upper (START) position, the two center contacts make connection to the two bottom contacts.

I soldered three lead wire to the three left (viewing from the back) contacts, ran it out through a hole I drilled in the back, and soldered a three pin plug I happened to have laying around.  If I were to cross the center pin on that male plug to the start side of another pin, the starter motor will get power, the choke will pull shut and the engine will crank over and start, usually within about one half second.  As soon as the starter isn't being cranked anymore, the choke will let off and go to the wide open position because of the spring on the solenoid.  When I cross the center pin with the other pin the generator will shut down.

That is the extent of the needed modification to the generator.  So long as I solder the cable I made up to the back of the switch, use my existing air cleaner body, pull rod, and modified choke lever (which is held in place with one screw), the system will quickly swap over to any other clone version of my generator.  Again, this system is working absolutely perfectly for me.

I'm not responsible for someone messing up their generator.  I'm not suggesting anyone do this.  I'm just saying that this is what I did and it works very well for me.  I can't express how very pleased I am with the results of this modification and the Xantrex AGS controller!