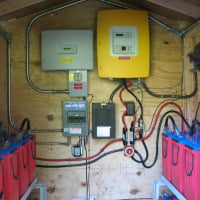 palausystem Solar Expert Posts: 122 ✭✭✭
April 2014 in Off Grid Solar & Battery Systems #1
I'm ignorant when it comes to how other controllers work. I do know that the SI is not the first choice for off-grid use. But I'm trying live with what I got.

Right now I have Boost set at 2.5v for 2.5 hrs. The SI goes from float into Boost when SOC drops to 70% or when 30% of nominal capacity has been used (added over time). So for us that means 2-3 times a week. I then try to do a 5 or 6 hr absorb once/week to get it into the high nineties or 100. Boost often brings it into the low nineties. So I'm trying to make sure I get a Full charge once/week.
One irritating thing about the SI is that it will not do an automatic Full charge like it's supposed to. If you have Full set for 5 hrs at 2.5v and every 7 days, it will look back over the week and say, "oh, you already met that criteria with your Boost charges so I'll just skip it this time and reset the counter. Wouldn't want to overcharge!" According to SMA that's just the way it is.

So if I want to mimic a "regular" off-grid controller, (absorb daily?) I suppose I could reduce the Boost parameters to something really minimal, and then set Full (with adjusted settings) to happen every day, thus bypassing Boost altogether. Then do a once/week 100% charge like I'm doing now (using the manual EQ with adjusted settings).

As far as automatic operation goes, how do other controllers handle things? My goal is to have as little interaction as possible while still getting a decent life-span from the battery.

Speaking of lifespan, our Surrette S-530's are 6 years old and I'm trying to get through next winter with them. For the first 3 or 4 years of their life they spent most of the time in the low to mid 80's SOC with rarely any kind of full charge. Our installer told us the SI would baby our batteries for long life. When I discovered the Full charge he had set for every two weeks was not happening, I began to learn more. Eventually with the help of this forum I began to play with the settings. Now that we are in the market for new batteries, I'd better have a clear idea of how to handle the SI.
Thanks...
Off-grid 48v, 3 kw PV, Sunny Island 5048U, SunnyBoy, US Battery RE L16XC  6v, 800ah, Genset: Kohler 8.5 RES propane.
0 · Share on Twitter