Parallel Loads - More or Less exactly the same as using AC Out2 ?

richardimorse Registered Users Posts: 98 ✭✭
April 21 edited April 22 in Off Grid Solar & Battery Systems #1
As I understand it, the only difference is the meter, Parallel loads provides a mechanism to split power demand off at the utility point of supply where the main utility branching DB board is usually located, as opposed to the inverter location (AC Out 2) which may be somewhere remote from this location, also using parallel loads with a meter provides a benefit over AC OUT2, in that that they show up on the GX console as a separate "Loads" box whereas the AC OUT2 power total is combined on the GX with AC OUT1 as "Critical Loads" (only 1 current sensor).

Inside the Victron this is controlled by relays which make and break the connection to AC IN and OUT2, the make and break connections are outside of the Victron when Parallel loads are used and can achieve equal, if not better results, because with parallel loads on a low battery condition you can switch them back to the utility (before the meter) instead of disconnecting them from power completely as is frequently done with AC OUT2 using VE config.

The Victron system will power any parallel loads from its battery and other power sources and will stop doing this when Loss of Mains occurs, if you are using MultiPlus II this decision is made inside the inverter, parallel loads (because AC IN is disconnected) and AC Out 2 are load shed

If you are using Quattro / Ziehl this is more complicated for instance, even though the Quattro is not certified for anti islanding, it will attempt to cut off AC IN unless LoM detection is disabled in VE Config - the Ziehl is supposed to be doing this for the Quattro.

If you stop the Quattro from disconnecting the input, then the point of mains disconnection is where the Ziehl disconnect contactor is placed.

SO here is the layout and power cable discussion points 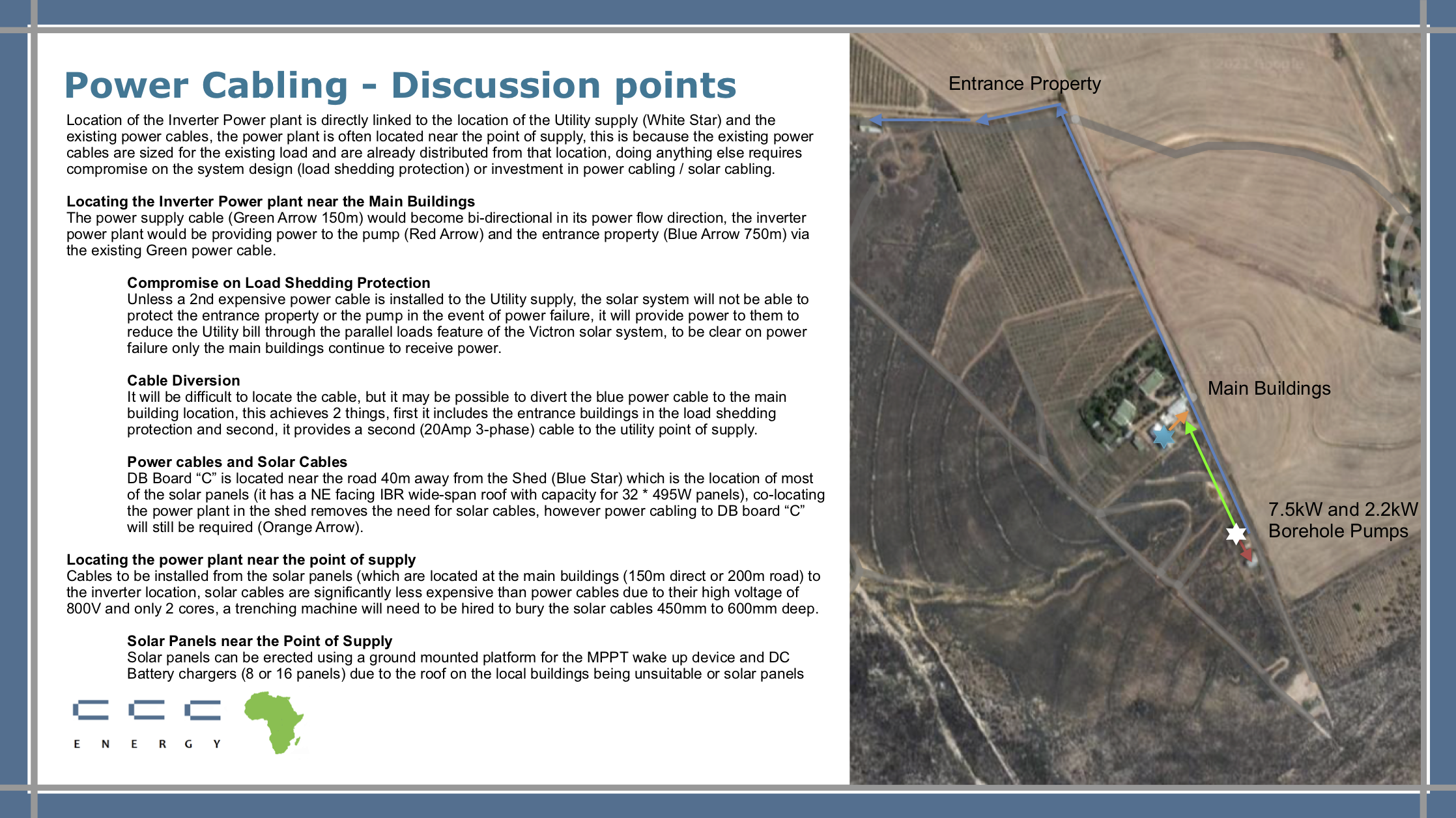 Now my point is - that it may not be exactly true (as stated in the picture) that the entrance property can not be protected, because the Quattro can be prevented from disconnecting the power and hence leaves it up to the ziehl therefore the point of utility disconnect can (in this case) be upstream of the "branch off" for the other geographic locations, then the other locations would continue to receive power as normal from the Quattro after the Ziehl has cut off the utility supply on mains power failure.

In my mind the easy option and the best option is to install a 2nd expensive power cable from the utility supply (80A - 50kVA) to wherever the inverters are located and that may well be the best approach, rather than attempting to compromise and complicate the installation.
0 · Share on Twitter