NicaSol Registered Users Posts: 32 ✭✭
March 2020 in Advanced Solar Electric Technical Forum #1
No reply from the manufacturer, vendor does not know, and an incomplete answer from Google and the forum, thought I'd try posting.
The specs for Ritar DC12-200C (12v, 200Ah, lead carbon) batteries only makes reference to a Cycle Use Voltage set point of 13.8-14.0 V @ 25C. They are AGM batteries and most specs for AGMs that I have seen list a Bulk/Absorption and Float set point.
Internet and forum searches for "Cycle Use Voltage" have returned only that batteries generally serve one of two purposes: stand-by use - batteries generally maintained on float with occasional emergency use; and cycle use - regularly cycled (discharged and charged - repeated bulk/absorb, float stages) on a daily basis. Even the vendor, for this particular battery, said the set points were 14.4 for Absorption and 13.7 for Float. Any thoughts on what the manufacturer was referring to with what appears to be a single set point? Thanks.
Spec screenshot below: 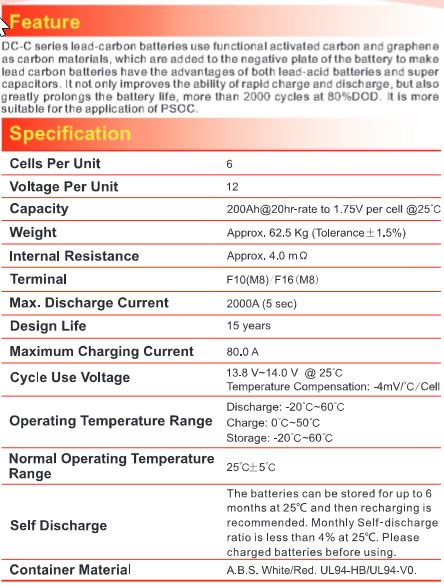